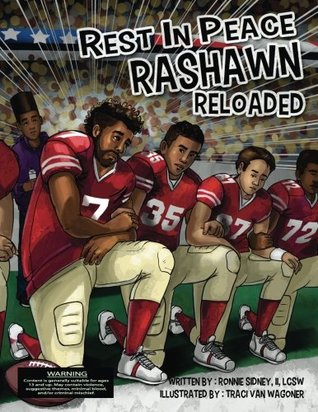 Many of you were introduced to Ronnie Sidney’s graphic novel RIP RaSawn Reloaded.  Have you read Jason Reynold’s book-in-verse Long Way Down? Both books are fire!  We need entire classroom sets for each title.  Ronnie Sidney wrote about what he lived and saw happening around him.  Jason grew up in the Maryland and Washington, DC area.  He also about what he lived and saw in his Long Way Down.  Jason explains this in an interview at the Kennedy Center’s November premier of  his novel as a one-act play.

The story centers on 15-year-old Will Holloman, who gets on the elevator in his building with a gun, intent on killing the person who just murdered his older brother. But as the elevator descends, it stops for passengers, each an important figure from Will’s life who has been victimized by gun violence. Reynolds calls it “Christmas Carol magic,” adding: “It’s not waving a wand, but it is magic. He’s being revisited by people from his own life, but are they ghosts, or are they his subconscious telling him to think

The story was inspired by Reynolds’s frequent visits to juvenile detention centers. “Most of these boys are in detention because of gang violence and don’t realize this turf stuff exists in its own vacuum,” he says. “ ‘You shoot me, I shoot you,’ and it’s been like that for decades.”

Reynolds knew that world. When he was 19, one of his best friends was murdered, execution-style. He and his friends vowed to exact revenge but never followed through on their plan; they didn’t know for sure who had pulled the trigger. “After we did not murder that #§§ℷ0∏∑, I realized how lucky that was,” he says.

In the video above, Reynolds expresses the hopes he has that the story will help boys who are confronted with terrible choices and that they think twice before they act.  He also wants adults to read this book and think about why we like to label youth and think of them as anything but children.

He wants youth to read Long Way Day and engage in answering the following questions about their lives and/or their peers:

As part of this year’s Festival of the Book, Jason will be in conversation with Laurie Halse Anderson at the Jefferson School of African American Heritage Center, Friday, 22 March 2019, 6PM. Their conversation will focus on the writing of tough topics.